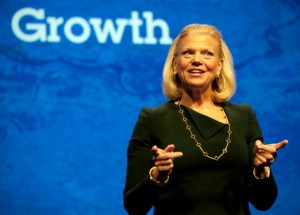 When Ginni Rometty, CEO of IBM strolled across the atrium connecting her company’s New York City office building and Trump Tower for a meeting with the President-elect’s incoming administration and tech industry leaders last month, she had a report in hand.

Rometty held a copy of a cost savings proposal drafted by the Technology CEO Council, a think tank of IT chieftains on which she sits as a member alongside Dell Technologies CEO Michael Dell, Intel CEO Brian Krzanich, Oracle co-CEO Safra Catz, and others. The report concluded that the government could save more than $1 trillion over the next decade by enacting certain tech policies.

“There is no shortage of ways that $1 trillion in savings could be redeployed for the benefit of more Americans,” Rometty said in a statement provided to Fortune along with an exclusive preview of that white paper ahead of its public release Thursday. “We are offering the incoming administration this report to help them innovate and invest for the American people.”

Rometty, who joined President-elect Trump’s economic advisory team last month, teased the set of recommendations in an open letter in November. In that missive, she mentioned how data center consolidation, cloud adoption, and cybersecurity could improve the internal workings—and economic outlook—of the U.S. government.

Additionally cosigned by the CEOs of Micron Technologies, Xerox, Akamai, and Qualcomm, the council’s report aims to address the United States’ growing $19 trillion debt and rusting digital infrastructure by providing recommendations from private industry to overhaul federal systems. For instance, streamlining supply chain operations could save the government $500 billion, according to the report.

That’s not all. Quashing fraudulent payments could free up $270 billion, and improving decision-making processes by applying big data-cum-“cognitive computing” (Big Blue’s nickname for machine learning algorithms) could save $205 billion.

Here’s a list of the potential savings areas contained in the report, drawn and extrapolated from private sector figures.

The latest report’s findings are very similar to an earlier iteration published by the council eight years ago, as President Barack Obama was taking office. That previous report, issued when Rometty’s predecessor Sam Palmisano headed IBM and sat on the council, also said that the government could save $1 trillion over the course of a decade through a comparable, albeit not identical, set of tech recommendations.

One major difference is the addition of “cognitive computing” to the number three spot on the latest report, a factor that has owed to a renaissance in artificial intelligence research in recent years. IBM, in particular, has been doubling down on the business opportunity with its Watson system.

Bruce Mehlman, executive director of the council, told Fortune on a call that he rejects conventional wisdom about a tax tradeoff when it comes to upgrading federal infrastructure.

Mehlman, the former assistant secretary for tech policy at the Commerce Department during George W. Bush’s presidency, believes that investing in up-to-date systems will reap considerable dividends, he said. Federal budget planners might try projecting five years out, as many businesses do, to stay ahead and save money in the long run, per advice in the report. After all, “those funds could drive modern infrastructure investments,” Rometty said.