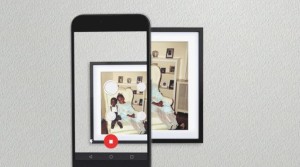 On the surface, Google Photos has a simple mission: to store your pictures. Specifically, Google says it wants the service to be a home for all of your photos, and today that mission expanded to encompass the old photos you took on a point-and-shoot back in the ’90s. The company just released a new app called PhotoScan for iOS and Android, and it promises to make preserving the memories in your old printed photos much easier.

PhotoScan improves on the old “photo of a photo” technique that many now use to quickly get a digital copy of old prints. It’s also a lot cheaper than sending pictures out to be scanned by a professional, not to mention faster and more convenient than using a flatbed scanner.

When you open up the PhotoScan app, you’re prompted to line up your picture within a border. Once you have the picture aligned, pressing the scan button will activate your phone’s flash and start the process of getting a high-quality representation of the photo. Four white circles will appear in four different quadrants of the image. You’ll be prompted to move your phone over each dot until it turns blue; once all four dots are scanned, the app pulls together the final image.

When moving the phone to scan each dot, the app is taking multiple images of the picture from different angles to effectively eliminate light glare — something Google cited as the biggest culprit that ruins digital pictures of photo prints. In practice, in Google’s tightly controlled demo setup, it worked perfectly. It was easy to see how the lights in the room cast glare on the photo print and equally obvious how the app managed to eliminate it in the final scan. It’s a bit of an abstract process to describe, but it worked as promised. We’ll need to test it further outside of Google’s own testbed, but the early results are definitely encouraging.

The app also lets you adjust the crop to remove any hint of the background surface peeking into the photo, but it’s otherwise a pretty minimal experience. Once you’re done scanning, the app prompts you to save your scans. They’re saved directly to your phone’s storage; you can then upload them to Google Photos or the backup service of your choice. Google specifically said that it wanted this app to exist outside of Google Photos so that people could scan images and use whatever service they want to back them up.

Adapted from an article by Nathan Ingraham for endgadget.com | Photo: google