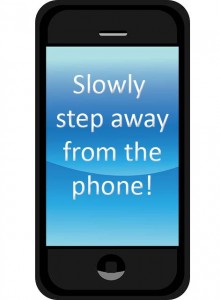 The typical American adult is using media for a full hour a day more than just last year, with smartphones accounting for most of the increase.

Even these numbers are probably underestimated, since while Nielsen measures the amount of time spent online on smartphones, it doesn’t count texting, taking selfies or talking on the phone.

Most Americans can sense the increase anecdotally given the ubiquity of smartphones. People stare at screens while waiting in line for fast food, riding in elevators or walking down the street. Retail outlets post signs pleading that phones be turned off. People check messages in bed before falling asleep, and reach for the devices upon waking up.

As she waits for her 5:45 a.m. spin class to begin, Cassandra Girao of Ossining, New York, sits on a bike scrolling through her email, listening to music or solving a puzzle.

“I feel like I would be lost without it,” Girao said. “My whole life is on it.”

Even so, Girao said she feels better when she gives the phone a rest. She sometimes hides tablets from her 4-year-old son to give him device-free days, and said he’s better behaved as a result.

An estimated 81 percent of American adults use a smartphone regularly, with the number of users growing by more than 20 million in the past year, said Glenn Enoch, senior vice president of audience insights for Nielsen.

Of the additional hour in media time that Nielsen has measured this year, smartphone usage accounts for 37 minutes and tablets 12 minutes. Online smartphone use averages an hour and 39 minutes a day—more than double what it was two years ago, Nielsen said.

Liana Sayer, director of the Time Use Laboratory at the University of Maryland, notices restaurant patrons who sit at tables staring at their phones and ignoring their companions. They might as well be eating alone.

“Young people text a lot, but they’re not doing it at the expense of face-to-face contact,” she said. “What I see that is more concerning is family members focusing on their phones and not sitting around the dinner table enjoying conversations.”

Smartphone usage has grown so quickly that there hasn’t been much research into what kind an impact it is having on people’s lives, Sayer said.

People spending more time on phones and tablets hasn’t caused a corresponding drop in the use of other media, an indication that there’s a lot of multi-tasking going on. People are spending 3 minutes less watching live television than they did a year ago, but they still spend 4½ hours a day in front of the TV, Nielsen said.

One ominous sign for television executives is that people aged 18 to 34 spend more of their time each day online than they do watching live television, by a margin of 39 percent of their media time to 29 percent. People over 50 prefer TV by 53 to 21 percent, Nielsen said.

Nielsen noticed another media milestone this year: For the first time, as many American homes subscribe to video services like Netflix or Hulu as there are homes with digital video recorders. Nearly 30 percent of homes have both DVRs and a streaming service.

By David Bauder for phys.org