This new bug could mess up your iPhone big-time

A five-second video is making its way around the internet, and when opened on iPhones causes the phone to lock up and reset. 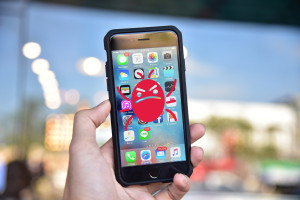 At first, everything seems fine, and when you start playing the video on an iPhone it appears to run normally. You can even exit the video and open other apps once it’s finished.

In the background, however, the video seems to start a loop, and within a minute of completion, you’ll start to notice the iPhone slow down considerably before ultimately freezing, requiring a reset of the phone.
While we won’t link to the video here, USA TODAY was able to confirm that the bug is real, having tested it on an iPhone 6S Plus running a beta version of iOS 10.2 as well as an iPhone 7 Plus running iOS 10.1.

We did not encounter any issues when playing the clip on a Samsung Galaxy S7 running Android 6.0.1.

Apple did not immediately respond to a request for comment.

The video started gaining traction Reddit yesterday, and has since gone viral with a YouTube video showing off the glitch racking up nearly 375,000 views over the last day. The bug is similar to a text message hack that went viral last year, where sending a particular message would automatically cause the recipient’s iPhone to restart.

No data appeared to be lost as a result of the bug, with the only result being the inconvenience of having to reset your phone. Once reset both of the iPhones we tested again functioned normally.

As always this holiday season, be careful with what you open.