How Scared We Should Be of an EMP Attack 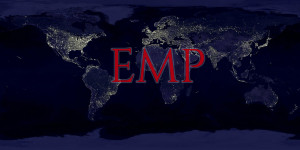 A military expert explains the threat and its likelihood

Electromagnetic pulses, or EMPs, usually show up in pop culture as a temporary way to disable electronics. In Ocean’s Eleven, one knocks out a casino’s power supply during a heist. In the Matrix movies, an EMP is a CGI energy blast that Morpheus uses to stop the Sentinels from attacking Zion.

In real life, however, EMPs are a potential threat to national security.

First imagined as a troubling after effect in the wake a nuclear attack, EMPs have recently reemerged as non-nuclear e-bombs that silently attack precious electricity. A burst of energy that fries electronic circuits within a blast radius, an EMP could theoretically knock out a power grid if it were large enough. That in turn could send a major city back to the Stone Age, or knock out a strategically significant military installation in an instant.

But is such a large EMP a plausible fear? Peter Pry, director of a bipartisan congressional commission called the EMP Task force, seems to think so. He went on Fox News this week to say that “nine out of ten Americans could die from starvation, disease, and societal collapse, if the blackout lasted a year.” Pry isn’t the only one worried: In a letter to investors last year, billionaire hedge fund manager Paul Singer warned that EMPs are now the “most significant threat” to American security.

EMP scaremongering has been a longtime staple for the tinfoil hat crowd, with popular conspiracy blog ZeroHedge claiming that an electromagnetic pulse attack would be “one of the fastest ways to cripple America and end the dominance of the United States in world affairs.”

But now, the US military is reportedly carting equipment into bunkers to shield it from EMPs. In April, some of the critical communications equipment at North American Aerospace Defense Command was moved into a bunker inside Cheyenne Mountain, a Cold War relic in Colorado that you might remember from the Matthew Broderick movie War Games.This was after the government had already disclosed a plan about a year ago to build a similar $44 million facility in Alaska for housing interceptor missiles.

So how scared should we be? I wasn’t sure, so I contacted a military analyst at the global intelligence firm Stratfor, the exquisitely named Sim Tack, to find out if we all need to buy EMP-proof iPhone cases, or whether EMPs are something we can put off studying until Skynet comes online.

VICE: First thing’s first: Is an EMP a real weapon?

Sim Tack: It’s not a work of fiction. It’s an actual technology that exists. It’s being played with in some capacity, and will potentially play a much greater role in future warfare. With the increasing importance of electronic circuits on the battlefield… There’s only more and more reason to create weapons that specifically target networking ability and electronics dependence.

Has the US entertained the idea of making EMP weapons?

Yes. That’s definitely something the US has looked into. EMPs were recognized as an effect of using nuclear weapons during test launches in the sixties. As with any type of natural force that is discovered, it became, “Hey, we can actually try and harness this power for military means.”

And have other countries built them?

Different countries have experimented with EMPs. Russia has. There was some stuff in the media recently about North Korea getting some EMP technology from Russia, although that technology is somewhat limited. But the general idea of using EMPs in warfare? That’s not just limited to the US.

Will a real EMP weapon work like the ones in The Matrix?

Well, an EMP overloads whatever weak circuits it can manage to overload, and basically destroys them, requiring that they be replaced by new electronic components to make that system functional again.

Right. And meanwhile in The Matrix it seems like the systems come back after a while.

That could potentially be what happens with hardened systems. Those might have the capacity to absorb an EMP, or work their way through that surge, and be operational again.

How might someone do serious damage with one right now?

You might spend a ton of money and time generating an EMP near a power plant. But—for instance—placing some explosives on the power lines coming out of that power plant would be a lot easier, a lot less complex, and a lot cheaper than building that EMP weapon.

What would be an example of this “future warfare” you speak of, where EMPs might come into play?

The US has not really been focusing the development of its military capability on peer-to-peer conflict per se, so from that point of view, it hasn’t been the main priority. If you look at the conflict in Eastern Ukraine… One of the things that’s been interesting to see there was how the electronic element of warfare has played out.

So to be clear, the Ukraine-Russia conflict doesn’t involve EMPs, but it’s an example of a modern conflict that might have a use for them? How so?

[The Russians] started to jam Ukrainian communications, and tap into [them]. They started to jam the operations of drones that were observing the separatists and the Russians. Then as a countermovement, the Ukrainians have had to look into getting drones that are more hardened against jamming. At the same time they’ve had to try and restructure their communications, and tried to keep their combatants from using cell phones.

So EMPs might come into play when two very developed countries go to war?

Yes, and Eastern Ukraine is just a blip on the radar… Imagine the importance of that kind of time to disrupt the network-centric warfare of your enemy in actual warfare.

I know that [the US has] built prototypes, and used those devices to test the hardening of other devices, so that they don’t have to set off a nuclear explosion to test circuits against EMPs. Of course, those prototypes and test devices aren’t in a format that you can simply drop over an enemy city tomorrow.

So I shouldn’t be worried about Al Qaeda using one to knock out the power grid? Paul Singer seems to think I should.

It’s not that EMPs are not a threat. It’s just that—although the effect would be massive—currently they’re not really a risk apart from nuclear strikes, so highlighting them as the greatest threat there is might not be entirely realistic.

But I’ve seen videos of people making them at home…

When we’re talking about realistic versus unrealistic threats, currently generating an EMP with a nuclear weapon is the most feasible way to do it. Homebuilt EMP weapons aren’t very feasible. The cost you would put into building such a system versus the benefit that you would actually gain is very, very impaired.

What’s the main challenge stopping small militaries from using them?

Besides the weight, and the cost of whatever you use to generate that kind of electricity—a capacitor, a large amount of batteries, or whatever power generation method—the cost would be so high, but the damage you can do with it would be so limited, that other much cheaper methods might be more efficient when it comes to damaging the area that you’re targeting.

OK, let’s talk about how to defend ourselves from these things. What’s “hardening”?

Hardening is designing electronic circuits to deal with the sudden power surge that comes from an EMP. That in some cases means using thicker, heavier conductors, or creating redundant circuits, or avoiding using sensitive elements within the circuit.

And how would I “harden” my electronics?

Basically, it’s the same as protecting a circuit from power surges, but you’re dealing with the fact that this kind of power surge affects every part of the circuit, rather than entering the circuit at one certain point.

And you really think we’re likely to see the kind of warfare that would involve this kind of thing?