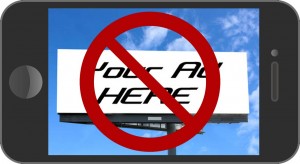 Approximately 408 million people are using mobile ad-blocking browsers, according to PageFair. They are most popular in emerging markets like China, India, Indonesia, and Pakistan; about 36 percent of those in the Asia-Pacific region block ads. In Europe and North America, there are about 14 million monthly active users of ad-blocking browsers.

“People are installing ad block for different reasons, many of which are indisputably valid,” PageFair CEO Sean Blanchfield wrote in the 2016 Mobile Adblocking Report.

“If the open Web is to survive, these reasons must be fundamentally addressed,” he continued. “I hope this report helps our industry move beyond debating the facts, to addressing the root cause of ad-blocking adoption while taking action to ensure that good ads get seen.”

Apple was one of the first major players to make the move: The company last summer announced plans to support ad blockers in iOS 9, which users were quick to employ.

But despite the hype, content-blocking apps on iOS have only 4.5 million downloads—a limited contribution to global usage, according to PageFair.

Among the 45 different iOS and Android ad-blocking browsers identified by PageFair, Alibaba-owned UC Browser (in its various iterations) boasts more users than all other forms of ad blocking combined. Other programs like Adblock Plus and Brave also block Web ads by default, while Opera and Firefox let users opt in.

“Many publishers and advertisers have hoped that mobile platforms and walled gardens would offer a refuge from ad blocking,” PageFair said, citing an August report that estimated a loss of $21.8 billion in advertising revenue in just 2015.

As users happily avoid looping videos and pop-ups, marketers around the world are struggling to meet sales goals. There is, however, “grounds for optimism,” PageFair said.

Since last summer, the company has working with global consumer groups, advertisers, agencies, and publishers on both sides of the Atlantic, discussing how to sustainably advertise on the new “blocked Web” portion of the Internet, in a way that solves the consumer issues that caused ad blocking.

By Stephani Mlot for pcmag.com