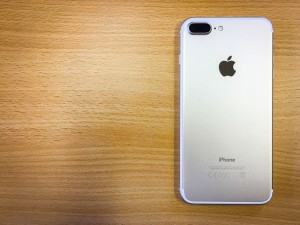 It’s far behind its Android competitors.

Apple said at a press event last month that the iPhone 7 has the best battery life of any smartphone it’s ever launched. But that doesn’t mean it can top Android competitors, according to new data.

The iPhone 7 lasted nearly 12 hours on a single charge during ongoing call time over cellular networks, and more than 10 hours when it’s continuously surfing the Internet over cellular, new data from product-testing firm Which has revealed. On call time, Apple’s  AAPL -0.55%  next-closest competitor, the Samsung Galaxy S7, more than doubles the iPhone 7. The leader, the HTC 10, can last more than 30 hours of talk time before its battery dies.

HTC’s smartphone is similarly impressive with Internet use, lasting more than 13 hours on a single charge, according to Which.

On its iPhone 7 listing, Apple says the smartphone has the “longest battery life ever in an iPhone,” adding that its iPhone 7 has up to two more hours of charge than its predecessor the iPhone 6s, can deliver up to 14 hours of talk time on a single charge, and up to 12 hours of Internet surfing. Apple said its extended battery life is thanks to efficiency built into the iPhone 7’s A10 Fusion processor.

Data from Which suggests Apple’s promoted battery life is a little bullish.

The findings could be damaging to Apple. According to research from countless market studies, those buying a new iPhone are interested in its improved battery life, citing it as one of the reason they’re buying Apple’s handset. If the iPhone 7 doesn’t deliver on the promise of major gains to battery life, it’s possible some customers might opt for another device or wait for next year’s iPhone instead of buy Apple’s latest handset.

The devices that deliver better battery life than the iPhone 7, after all, are direct competitors to Apple’s smartphone and come with their own collection of appealing features.

So, why does Apple’s iPhone 7 have trouble competing on battery life? According to Which, the smartphone’s 1,960mAh battery is to blame. The HTC 10, for instance, has a 3,000mAh battery, making it notably smaller than the market leader’s.

“It should hardly be surprising that one battery nearly half the size of another offers roughly half as much charge,” the product tester said in a statement.

Which testing is conducted in the United Kingdom. The company uses a phone network simulator to create identical environments for all of the smartphones to be tested. Screen brightness is set to identical levels and a phone’s battery is fully discharged and then charged to its maximum level. Calls over cellular networks are continuous, and the Internet surfing test continually updates a “special web page.”