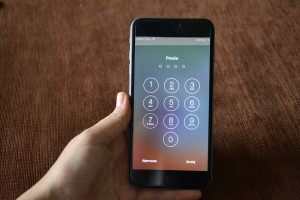 Apple iPhone 6 and iPhone 6 Plus devices are reported to be suffering from a significant touchscreen flaw. Phones affected by this so-named “touch disease” experience completely unresponsive touchscreens.

Even though a class-action lawsuit regarding this issue has been filed, Apple still hasn’t made any formal announcement, or public comment, about this widespread flaw. This could prove detrimental to potential Apple customers who are unaware of the problem, painting a poor image of the company’s concerns about their customer’s experience.

Apple is surely aware of the problem as the touch disease has already accounts for 11 percent of all Apple Store repairs, according to AppleInsider, a number that surpasses all other repair issues on a daily basis.

The most obvious indicator of the touch disease is a flickering gray bar that runs across the top of the screen, covering the status bar. Shortly thereafter, the entire screen becomes unresponsive.

One theory explains that as the phone is slid out of a pocket or purse this action puts a strain on the case and bends the screen. This is similar to the “bendgate” issue that pointed to an extreme fragility to the case, which would bend with even the slightest pressure.  With each bend, chips inside the logic board become dislodged and subsequently fail to carry signals when touched.

What to do if your phone is infected

Phone replacement can cost over $300 if you are well past your warranty, and there’s no guarantee that a replacement won’t have the same problem.

You may qualify for a lower replacement cost around $100 if your warranty hasn’t expired.

You can also go to a third-party repair service and have the phone fixed. But, consider these two things: this is a difficult repair, so no guarantee it will be fixed.  In fact, the problem could get worse. If your phone is still under warranty, you run the risk of voiding it, especially if the repair shop is not an authorized Apple repair store.

Don’t try to repair it yourself, unless you think you’ve got nothing to lose.  There are videos on the internet you can scout out for the steps.

It’s frustrating to iPhone 6 owners who have this disease as they are being required to pay for a problem they didn’t create.  It’s a design flaw. Plus, even if the phones are replaced, there’s no assurance it won’t happen again. So until Apple makes an official announcement or offers a better solution, you’re out of luck.

Adapted from an article by Techtimes.com | Photo Credit – Pixabay