“Brighten” Someone’s Day In Seconds with this Anti-Bullying App

Austin Kevitch was in high school when he first came up with the idea for an app that would allow users to send compliments to each other anonymously. But it wasn’t until tragedy struck years later that he decided to turn that idea into reality.

Kevitch was studying abroad in South Africa when his friend, Oliver Pacchiana, died in a rock climbing accident. Soon after, positive and loving messages flooded Pacchiana’s Facebook wall. The tributes moved Kevitch deeply, and he imagined how much they would have meant to his friend if he’d received them while he was alive.

“Just hearing one of those comments could change your life,” said Kevitch, now 25 and the CEO of the app Brighten. “I learned a lot about him just from what people were sharing. It was a wake-up call that the world needs something like [Brighten].”

Today, Kevitch runs Brighten out of Santa Monica, California, with a six-person staff. The app, downloaded over 1 million times since its 2015 release, allows users to send out anonymous compliments called “brightens,” although Kevitch says most people choose to identify themselves. Users can also send a snapshot of their smile to the person who complimented them.

Social media can be a minefield of anxiety for many, so Kevitch has made it his mission to create a space that’s focused on spreading positivity.

“It’s all about establishing a positive culture,” he said. “No one is inherently bad. People just have bad days and project that negativity onto someone else.”

The positivity is now spreading through communities and classrooms, with many educators embracing the app as an anti-bullying tool. 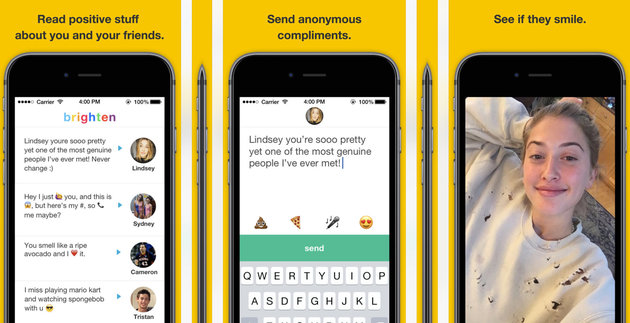 Lauren Naselli, a third-grade teacher in in Bridgewater, New Jersey, began using Brighten with co-teacher Courtney Rothkugel last year, after their principal encouraged them to test it out with students.

Since the school uses Chromebooks, students couldn’t work with the actual app (Brighten is currently available only to iOS users), but Naselli came up with a low-tech way to teach the concept.

Each day, a different group of students received pieces of paper with hand-drawn iPhones on them. The students would write their own “brightens” on the papers and hand them out to different students each day.

“They loved it,” Naselli said. “It created a warm and comfortable environment. … Our class really lifted each other up and supported one another.”

She reached out to Brighten to see if there was a version of the app she could use in her classroom. Kevitch said his team was so touched by her story that they sent Naselli’s students free Brighten t-shirts.

Naselli said she’s “super sensitive” to bullying and was pleased to see how the Brighten-inspired activity created class unity. “There are people with good hearts everywhere,” she said. “And I think this app can help bring that out.”

Tim Cannon, who has been friends with Kevitch since high school, left his corporate job in Chicago to lead Brighten’s community outreach program. He now works with more than 1,000 high school and college students who volunteer to promote the app on their campuses.

“To know that I’ve at least given it my all to put something good out in the world ― I wake up every day feeling grateful and appreciative and happy,” he said.

Brighten recently partnered with the gun violence prevention organization Sandy Hook Promise for “Start With Hello Week,” a weeklong effort to fight social isolation. Students in more than 1,700 schools will be introduced to the app.

More than 20 percent of students ages 12 to 18 report being bullied, according to a 2015 survey conducted by the Department of Education.

Anti-bullying expert Dr. Malcolm Smith is optimistic about Brighten’s “power to use social media to do good,” though he is hesitant to embrace the app’s anonymity feature as a way to combat cyberbullying.

“Anytime a child can say something positive to someone ― even if it’s someone they don’t know ― it causes a very positive brain interaction,” Smith said of the app. “But it’s so much better for a person’s soul to give compliments in person.”

First lady Melania Trump announced her desire to tackle online bullying in November. Though President Donald Trump frequently engages in cyberbullying on Twitter, Kevitch said he would gladly partner with the White House if it would spark positive change in society at large.

“I think it’s going to benefit the current generation of high schoolers,” Kevitch said. “Melania, if you’re reading this, text me. Send me a Brighten compliment.”

An Android version of the app is currently in the works.