What really killed the payphone? 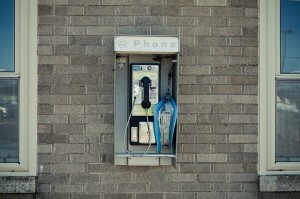 We bet you think it was the cell phone. This article outlines why that may not be so.

Charles Katz made his money from basketball. On most mornings, he’d enter a phone booth on Sunset Blvd., in his hometown of Los Angeles, and wire illegal gambling wagers to Miami and Boston. The FBI caught wind of his activity, and by collaborating with the telephone company, they wiretapped Katz’s conversation, using it as evidence for his arrest.

Katz argued that this was an invasion of privacy, and in the 1967 Supreme Court case Katz v. United States, the justices ruled 7-1 in his favor, declaring that the Fourth Amendment protects “people, not places.” Someone conducting business in a phone booth should have a “reasonable expectation of privacy.”

Law enforcement no longer could tap a public pay phone without a search warrant, and with that protection, phone booths became a popular place for criminals to make and receive calls. Crime sprawled through the next decades, peaking in the early 1990s.

At a time when 95 percent of Americans own a mobile phone, the phone booth seems quaint and outdated. People have waxed nostalgic over the loss this technology in eulogies, public art installations, and documentaries. Since a peak of 2.6 million public pay phones in the mid-1990s, this ubiquitous infrastructure has been on the decline. After the devices stopped turning a profit, AT&T officially announced its exit from the pay phone market in 2007. Verizon followed suit in 2011.

Apart from mobile phones displacing the pay phone, a quieter public-policy battle has also contributed to their disappearance. Cities that saw the pay phone as a lightning rod for crime introduced legislation to municipal codes across the nation throughout the ’90s to restrict pay-phone access or eliminate the machines, which could be found on nearly every block. Though outright bans were largely unsuccessful, Philadelphia, Chicago, and Kansas City are just a few cities that proposed legislation to remove pay phones from the streets. Los Angeles, New Orleans, and Dover instituted site-specific restrictions, such as forbidding pay phones outside liquor stores or public housing, because these were believed to be the most common locations where crime was conducted over the phone.

Between the early 1980s and the mid ’90s, the number of pay phones in the United States nearly doubled. In 1984, the Federal Communications Commission broke the AT&T monopoly in telecommunications, creating seven independent Regional Bell Operating Companies for domestic calling services. Several years later, the pay-phone industry was deregulated. With more competition and less regulation, the local telephone companies in urban areas tried to install pay phones on every block, realizing that people frequently would need to make calls on the go. The mobile phone wasn’t viewed as an immediate threat; during natural disasters, cell towers would jam or go down, but hardwired public phones would withstand tornadoes, earthquakes, and hurricanes. They were also crucial for people struck by car trouble, pickpockets, and when the few who had cell phones found their batteries depleted.

City dwellers, however, were just as likely to see the heroic pay phone as a hotspot for illegal activity. Pay-phone companies acknowledged their product was a common tool for drug dealers, gamblers, pimps, and scammers, mostly due to privacy laws that allowed callers to remain anonymous. At the cities behest, they removed inbound calling capabilities from many public phones. A dealer no longer could lurk near a pay phone waiting to hear about a drop off.

Still, these barriers were not enough. In certain cities, politicians lobbied for the removal of all pay phones, hoping their elimination might eradicate street crime and put public fears at ease. A particularly intense lobby for a pay-phone ban emerged in Chicago in 1992. Concerned about a rise in drug trafficking, communities urged lawmakers to get rid of pay phones across the city. This initiative was driven by a widespread misunderstanding that pay phone calls were untraceable. As anyone who has watched The Wire knows, being hardwired allows phone calls to be easily tracked by law enforcement. Though the recordings cannot be heard without a warrant, police can identify a specific pay phone they suspect was used in criminal activity.

But policing pay phones negatively impacted those who need them most. In an effort to make pay-phone environments feel safer, cities tended to implement rules that require special permits for pay-phone installation. This prohibited them from being placed on the premises of certain businesses seen to harbor crime, like liquor stores or gas stations, or facilitated their quick removal if deemed a public nuisance. The efforts led to fewer pay phones in impoverished areas, making them inaccessible to their most-likely users.

The restrictions on pay phones persist today, even after most of the phones have disappeared. They are often tied to legislation that calls for public order. Depending on the city, pay-phone regulations are placed under ordinances relating to loitering, public nuisance, vending and soliciting, or vandalism. These laws are vague and expansive in language, and they disproportionately affect minorities. They force communities to do their own patrolling, and often invite implicit racial biases to drive suspicion of illicit activity. Neighbors and shop owners might view public-phone callers, often low-income people of color, as potential criminals, leading them to advocate for the removal of pay phones.

Some cities that have passed initiatives to remove pay phones due to their perceived role in crime are Baltimore, Toledo, and Jacksonville—even well after mobile phones became commonplace. These concerns spread beyond urban centers, too. Budding suburban communities sometimes write pay-phone restrictions into their town charters, their residents fearing pay phone-facilitated gang activity that might into their safe havens.

n Chapter I, Article 4 of the Los Angeles municipal code, public telephones are banned on the site of any public-benefit project. This includes police stations, one of the areas where pay phones are still frequently used. If discharged without money or a cell phone, a person recently released from court may need to place a collect call to contact their family. The pay phone is also an important tool for many migrants. The American Public Communication Council claims that long-distance rates on pay phones are often lower than those on a basic cell phone plan, making the pay phone a vital tool to contact family and friends abroad. With the pay phone still crucial for these communities, people on the poverty line without access to a landline might hang around a pay phone waiting for an important call—unwittingly finding themselves in violation of the law.

After the passage of loitering laws in Chicago, some 40,000 people were arrested between 1992 and 1999 for congregating in groups of two or more. The majority of those arrested were black and Latino men in low-income neighborhoods. The Illinois Supreme Court called Chicago’s loitering law unconstitutional, and it was eventually replaced with a variant of New York City’s stop-and-frisk program, another controversial method of identifying potential criminals. The American Civil Liberties Union reported that, in 2013, stop-and-frisk reached a peak of 685,724 incidents. The law was deemed to be used excessively and unconstitutionally that year. The number of arrests has since plummeted, though thousands of searches continue. Last year, more than 75 percent of those stopped were innocent, according to the New York Civil Liberties Union.

Despite the longstanding association of pay phones with criminality (real or imagined), not every city is calling for their removal. New York City’s LinkNYC, which went live in February 2016, is an ambitious initiative to repurpose more than 7,500 pay phones into internet hotspots and charging stations. Over the last year, Broadway and 3rd St. in Manhattan have become LinkNYC thoroughfares, bringing free Wi-Fi and domestic calling to the masses.

But the same complaints that plagued pay phones for decades persist in these new iterations. Some homeless people and other users have built encampments around the kiosks, overstaying their welcome by watching movies or playing music for hours and running afoul of loitering ordinances. Vandalism is common and expected, so the high-tech kiosks are equipped with sensors to detect damage, graffiti, and environmental changes. Some residents even claim the stations have been capitalized by drug dealers, a 21st-century update to the phone booth as a drug lord’s corner office.

LinkNYC also brings up issues that were unimaginable in the heyday of the pay phone. Web browsing was deactivated only seven months after the project’s launch, after complaints that users were watching pornography in the middle of the street. Other concerns pertain to privacy. The kiosks are profitable thanks to ad revenue, and while CityBridge, LinkNYC’s parent company, promises not to sell user data, it does allow the data to be shared amongst its advertisers. Some see this massive data collection as spying, and call for more definitive terms in CityBridge’s privacy policy.

As of now, no new legislation has been introduced to specifically lay down new laws for the kiosks, but pre-existing ordinances still apply. Violations relating to loitering, vandalism, and public nuisance written in part for the era of pay phones still put users in vulnerable positions. In regards to electronic data, Katz v. United States becomes ever more relevant given the increased threats to privacy in the digital age.

One might wonder what will happen to people in areas like the South Bronx, Harlem, or Jackson Heights when pay phones completely vanish. On the one hand, one in five Americans rely on their smartphone as their sole access to the internet. On the other, the pay phone’s service is crucial for the dwindling numbers of people without access to cellular networks, and the phone’s removal may cut them off from a world that increasingly eschews face-to-face interaction.

As cities become even more connected and surveilled, laws will need to strike a balance between old and new technologies. Public-nuisance legislation offers one approach; it is written broadly enough to cover infrastructure in all phases of technological development. But unless forced to clarify the letter of the law, city ordinances targeting criminal activity can continue to be distorted to target those already put at a disadvantage by public policy and socioeconomic conditions. Technological innovation had a role in the decline of the pay phone. But fear and paranoia did it in.