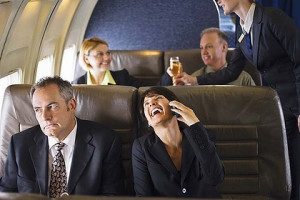 Flight attendants and others have complained that the calls could be disruptive. But the Department of Transportation said Thursday that it envisioned allowing the calls if airlines tell all customers about the policy when they buy their tickets.

That way, customers could make other travel arrangements if they feared sitting next to passengers chatting on their phones.

There is a 60-day comment period, and the proposal leaves the door open to the possibility that federal officials could still impose an outright ban.

The Federal Communications Commission prohibits passengers from making cellphone calls during flights, but not Wi-Fi calls.

“Today’s proposal will ensure that air travelers are not unwillingly exposed to voice calls, as many of them are troubled over the idea of passengers talking on cell phones in flight,” Transportation Secretary Anthony Foxx said in a statement. In 2014, the department issued a request for public comments on the possibility of permitting the calls and the response was overwhelmingly negative.

Sara Nelson, president of the Association of Flight Attendants-CWA, said anything short of a ban on calls is “reckless.” Flight attendants have said previously that they fear the calls could lead to fights between passengers who want to make calls and passengers who don’t want to listen to the conversations.

“It threatens aviation security and increases the likelihood of conflict in the skies. It threatens safety for crews and passengers,” Nelson said.

However, the U.S. airlines’ trade group opposes a government ban on in-flight calls.

“We have long held that this was not a matter for DOT to regulate, and we believe airlines should be able to determine what services can be safely offered in flight and make those decisions based on what is in the best interests of their passengers and crewmembers,” a spokeswoman for Airlines for America, Kathy Grannis Allen, said by email.

Southwest Airlines and Alaska Airlines said they have no plans to allow voice calls.

“Our customers have expressed concerns regarding the potentially disruptive nature of in-flight voice calls,” said Southwest spokesman Brian Parrish. Alaska Airlines spokeswoman Bobbie Egan said the carrier surveyed passengers a few years ago and got “a strong reaction” that they didn’t want calls.

A Delta Air Lines spokeswoman noted that the carrier has opposed voice calls for several years.

United Airlines said it was reviewing the proposal and would listen to the views of customers and employees. American referred questions to the trade group. JetBlue did not have an immediate comment.

A recent Associated Press-GfK poll found that 48 percent of Americans oppose allowing cellphones to be used for voice calls while flying; just 19 percent support it. Another 30 percent are neutral.

Among those who fly, opposition is stronger. Looking just at Americans who have taken more than one flight in the past year, 59 percent are against allowing calls on planes. That number grows to 78 percent among those who’ve taken four or more flights.

Most Middle East airlines and a few in Asia and Europe already allow voice calls on planes. Others allow texting.

Southwest Airlines on Wednesday started allowing passengers—for $2 a day—to use iPhones to send and receive text messages while on board through a satellite connection. The system will expand to Android phones early next year.

By by Joan Lowy And David Koenig for phys.org | Photo: yardi.com