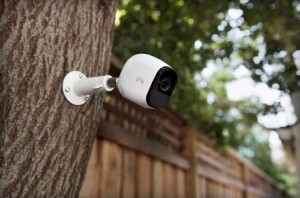 Netgear is rounding out the features of its wireless security camera with a new model, called the Arlo Pro. It’s more or less the same product: a camera meant to be placed inside or outdoors that records video whenever it sees motion and can alert owners through a connected app. But the Pro model has a few small but useful additions.

The most notable change may be that the Pro model uses a rechargeable battery, whereas the standard Arlo uses replaceable batteries that have to be swapped out every few months. Netgear says the Pro can run up to six months between charges, which would be pretty great, since you don’t want to have to constantly take them down for upkeep. The camera supports a wired connection, too.

A microphone and speaker have also been added to the Pro model, allowing for two things. First, the camera can be set to start recording any time it picks up noise. Second, and perhaps more useful, the camera can effectively serve as an intercom, letting owners talk through the Arlo Pro’s app to whoever’s standing in front of their camera.

Another big feature is being added in a software update later this year. Rather than alerting owners to all motion that Arlo sees, the camera will be able to start identifying different objects, so that it could, for instance, ignore cars or pets that walk by, but still send an alert when it sees a person.

Netgear says that its Arlo camera series — which before now included only the Arlo wireless camera and the Arlo Q wired camera — has been a surprise success. It claims to be responsible for 30 percent of the home camera market’s growth over the past year, outperforming familiar names like Nest and Canary.

Largely, this new model seems to be going after Canary. Canary announced a new camera called Flex last month, and it’s essentially a nicer-looking version of the Arlo Pro. It’s weatherproof, with a built-in battery, and only sends alerts when it detects motion. It also has a big advantage: the Arlo Pro requires a hub; the Canary doesn’t.

Netgear hopes its camera will stand out by having longer battery life. Canary declined to state specific battery-life estimates when I spoke with it in September, instead saying that the Flex would last for “many months,” which sounds shorter than the six months Netgear is promising.

Of course, the bigger differentiator might be which camera does a better job with alerts. If one bothers its owners with a notification every time a bird flies by, it’ll probably be a nonstarter.

The Arlo Pro goes on sale today for $249.99, with a hub included (it’s been updated to include a siren). For people who already have an Arlo hub — including the old model — standalone cameras will be available for $189.99 each.

by Jacob Kastrenakes for theverge.com