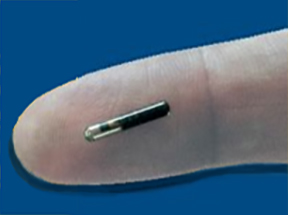 Swedish company Epicenter will embed a chip into about 150 workers, so bosses can monitor toilet breaks and how long they work. The workers volunteered to have the microchip, which is about as big as a grain of rice, implanted for free.

Patrick Mesterton, co-founder and chief executive of Epicenter, an innovation and technology company, said the microchips inserted into employees’ hands would simplify life.

With the radiofrequency identification chip, they’ll be able to open doors and use office technology, like photocopiers, and it can even pay for lunch at the office cafe.

“You can do airline fares with it, you can also go to your local gym … so it basically replaces a lot of things you have other communication devices for, whether it be credit cards, or keys, or things like that.”

Two years ago, many of Epicentre’s employees had already been chipped and used the technology in their everyday life.

“It’s an implant in the hand that enables them to digitise professional information and communicate with devices both personal and within Epicenter. Once ‘chipped’ with this technology, members can interact with the building with a simple swipe of the hand. Chips can also be programmed to hold contact information and talk to smartphone apps,” he said.

These types of microchips have been used in humans and animals before and means people don’t need to keep track of multiple passwords and PINs because it will all be installed on the inserted chip.

Emilott Lantz had a microchip implanted under her skin about three years ago and told Swedish newspaper The Local, “This is the present, not the future. To me, it’s weird that we haven’t seen this sooner.”

Mesterton said the idea wasn’t that far-fetched, as people had been implanting devices under their skin for decades, including things like pacemakers.

“That’s a way, way more serious thing than having a small chip that can actually communicate with devices,” he said.

Microbiologist Ben Libberton, from Swedish university Karolinska Institute, told the ABC the chip could compromise security and hold a lot of private information.

All of that data could conceivably be collected.

From posting by news.com.au

Epicenter is Stockholm’s first digital House of Innovation at the heart of the city and Sweden’s digital landscape. At Epicenter members are invited to innovate alongside the world’s fastest growing digital companies and creative corporate initiatives. Within Epicenter, Swedish and international entrepreneurs and companies meet to collaborate, learn and grow their businesses.

The conception and development of Epicenter is based on the founding teams extensive knowledge in building companies designed to create innovation with impact. Epicenter is managed by growth experts Result and leading digital knowledge event Sime and is part of AMF Fastigheter’s district being developed around Mood Stockholm.