CISOs are feeling the pressure when it comes to cybersecurity management, but new data from Cisco’s annual report may help in getting them the buy-in they need. 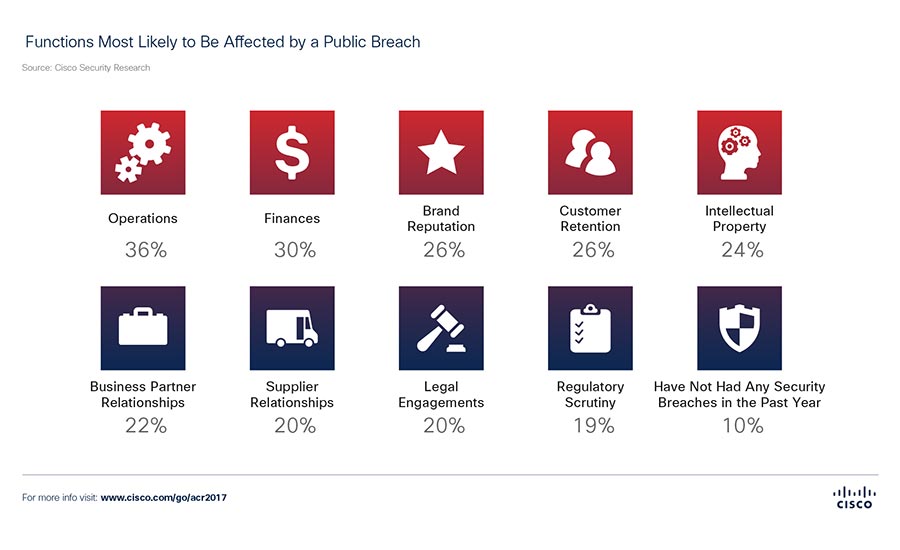 The Cisco 2017 Annual Cybersecurity Report, released 1/31/17, outlines some of the major trends and risks facing enterprises, compiling data from surveys of approximately 3,000 CISOs.

Cisco CISO, Steve Martino, has stated that enterprises are realizing that losses from data breaches and cybersecurity vulnerabilities have tangible repercussions for the business. As a result of public breaches, 29 percent of security professionals surveyed say their organizations experienced a loss of revenue, and 38 percent of that group said revenue loss was 20 percent or higher. Security professionals also cite rising losses of opportunity and customers after cyberattacks.

Operations and finance are feeling the effects keenest, as these are the top two functions likely to be affected by a public breach. Martino says that if an IT department experiences 1 to 8 hours of system downtime (as 45 percent of outages reported do), it can result in monetary losses but also a disruption in services and deliverables. Forty-one percent of network outages affect between 11 percent and 30 percent of the organizations’ systems, significantly hindering the business for an extended period.