People Are Finding It Hard to Focus on Work Right Now 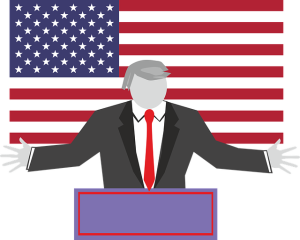 A survey finds that nearly a third of people say they have been less productive since the election.

Months before the election, there were reports of greater political tension in offices than in previous election cycles. In one survey from the American Psychological Association, 10 percent of respondents said that political discussions at work led to stress, feeling cynical, difficulty finishing work, lower work quality, and diminished productivity.

Now, a new survey commissioned by BetterWorks—a software company that helps workers with setting and tracking goals—finds that post-election, politics is continuing to take a toll on workplace productivity. The online survey included 500 nationally representative, full-time American workers, and found that 87 percent of them read political social-media posts during the day, and nearly 50 percent reported seeing a political conversation turning into an argument in the workplace. Twenty-nine percent of respondents say they’ve been less productive since the election.

While simply reading political posts at work isn’t in itself a cause for concern, it’s the potential negative impact it has on workers that could pose a challenge for employers. The issue of “not working at work” is one most employers were aware of well before the election. And the stress of the 2016 election both at home and at work was already on the radar of many managers. In fact, some companies said that the election result had become a HR challenge, according to BetterWorks. Still, companies attempted to handle the mixing of a tense political climate and workplace norms the best they could:  Some held debriefing sessions about how to appropriately process the results while at work, while some managers wrote all-staff emails emphasizing respect for colleagues.

Kris Duggan, the CEO of BetterWorks, says that anecdotally he’s seen some changes at the workplace since the election. That’s why the company commissioned the survey in the first place. “People spend time on Facebook, they go and look at cat photos and have some down time, and that’s fine. With all the political posts, it seemed like people were getting worked up, argumentative, and distracted,” says Duggan.

According to a study from McKinsey, workplace incivility was already on the rise. Researchers suspect the increasing rudeness at the office could result from a variety of factors: from the rise of remote work, to tension over changing workplace hierarchies, or the lack of face-to-face interaction in the age of email and Slack. For businesses, there are costs associated with less collegial workplaces including increased stress, employee turnover, and eroding the trust required for collaborative work. Duggan says that managers should help their employees focus on work, and that while support groups or other interventions sound good, it might be a further distraction. “The problem with that is you do a debrief about the election, then you have to do a debrief at the inauguration, then you have to do a debrief about the first week, the second week, and it doesn’t stop.”

While the survey BetterWorks conducted is small, it reveals a paradox in the productivity culture: The idea of not bringing politics to work is not just old school, it also clashes with another increasingly popular doctrine of modern work—the idea of bringing your “whole self” to the workplace. Even HR professionals admit that making the office a politics-free zone would be pretty hard at this point.

In other words, there’s a need for balance that hasn’t yet been found as American politics continues to be so eventful. How managers will deal with that is ultimately up to them, but in a cultural moment where even newspapers are writing about how to manage fatigue and stress from consuming the news, it’s not surprising that workplaces will have to cope with this dynamic, too.